Biden Threatens To Run Over Reporter Who Asked About Israel 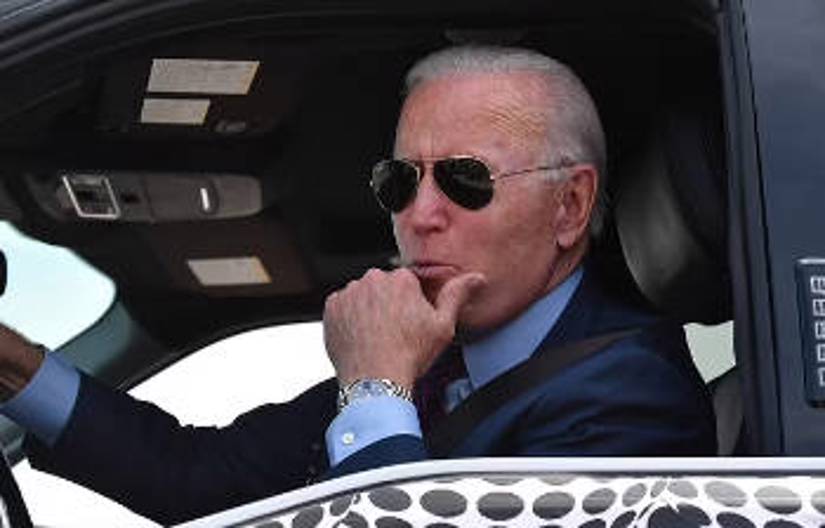 So far, the only thing Biden seems to be good at is avoiding the press at all cost. From cheat sheets to prescreened questions, Biden is proving the double standard he is given over his former opponent, President Donald Trump. And that same treatment was on full display as Biden joked about running reporters over while driving Ford’s newest electric truck.

On Tuesday, Biden toured the Ford plant in Michigan, because other than immigrants flooding the border and Israel on the brink of war - what else did he have to do? Surrounded by the press, even Biden couldn’t slip away and hide as he usually does. But that doesn’t mean he was in the hot seat as most reporters stuck with generic questions about his taste in cars. That was until one reporter actually did her job and asked him about the growing conflict in Israel.

As if told not to ask any serious questions beforehand, the nearby reporters and even Biden himself appeared surprised when he was asked by a member of the press, "Mr. President, can I ask you a quick question on Israel before you drive away since it’s so important?"

Sitting behind the wheel of the electric truck, Biden responded, "No, you can’t. Not unless you get in front of the car as I step on it."

Not giving the female reporter any time to answer, Biden casually tossed the threat aside by adding, "I’m only teasing." And before the reporter could ask her question again, he floored it, leaving everyone in the dust.

While Biden might have successfully dodged another encounter with the press, the incident proves the special arrangement between the media and the Democrats. Just a few months ago, the press was hurling apocalypse-style articles about Trump and the end of America. And it was way worse if President Trump tried to make a joke. The media displayed Trump as a racist, sexist, and even incompetent, yet at the time - our country and its allies were safe, unlike now.

Not the only ones to notice the double standard, aide to Ted Cruz, Steve Guest was stunned by Biden's actions. He said, "This would be a five-alarm fire of a news cycle if Joe Biden was a Republican and said this to a reporter."

But don’t worry, while Biden continues to threaten reporters, White House press secretary Jen Psaki was sure to tweet about the “paramount responsibility” of “ensuring the safety and security of journalists.”