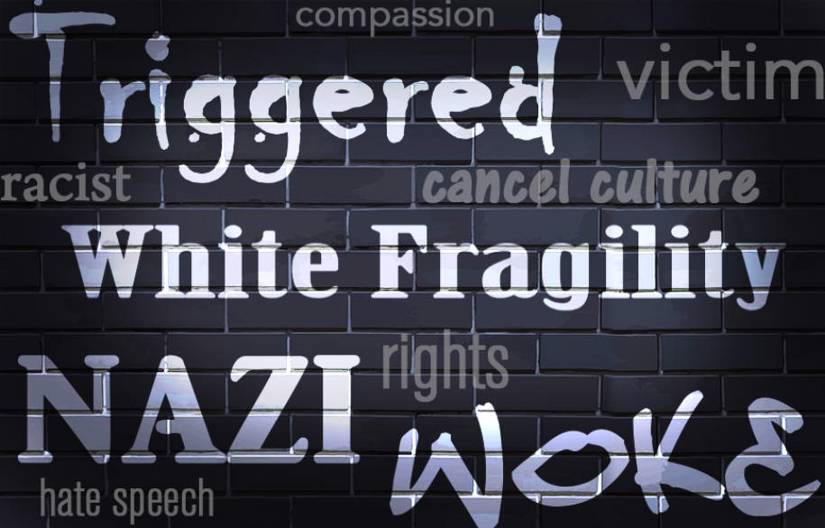 TRIGGERED- is a word used by Liberals to let you know that they don’t have any facts to challenge what you just said, so it makes them angry. Triggered, really? People who hear something they disagree with, or might find offensive, should just leave the room or change the channel.

WOKE- is being aware of social justice issues that might make some people uncomfortable or, wait for it, triggered! The woke culture is a disease that is metastasizing through the minds of narrow-minded liberals, with no end in sight. When are they going to realize that if you cancel everything that is offensive to everyone, there will be no words left to say. Anyone can find offense in anything. It's not society’s job to make sure they're not offended. It's their job to decide how to handle a situation where they encounter something they disagree with or don’t like. Remember...just because YOUR feelings are hurt, doesn’t make YOU right.

WHITE FRAGILITY- is described as “discomfort and defensiveness on the part of a white person when confronted by information about racial inequality and injustice”. Give me a break! This phrase is racist by anyone's standards. You’re telling me that I’m reacting to something because of the color of my skin?? Isn't THAT the literal definition of racism?? The “white shaming” that is going on in our country, and especially on our college campuses, is out of control. They are teaching that you should be ashamed of the color of your skin, and you should apologize for it. Nobody should be ashamed of who they are, the color of their skin, what country they're from, or what neighborhood they live in. This is what makes us all unique. Be proud of your God given personal characteristics and heritage. We are all who we are. Period.

NAZI- Today far too many people are overusing this word to describe anyone they dislike. The majority of those people are Triggered, Woke, Liberals that are full of White Fragility (did you see what I did there?). The word “Nazi” is shortened from the German phrase “Nationalsozialistische” which translates to “National Socialist”. I realize that many on the Left are extreme hypocrites, but this takes the cake! The Nazi Party platform is so similar to the Democrat Party platform, that if you read the Nazi agenda to your liberal friends without telling them what it was, they would probably start cheering. Hitler and the Nazi’s were horrific and despicable. This is not a phrase that should be thrown around as flippantly as it is by the Left. They should do a little homework before they start using it. Every time I hear a Liberal say Nazi, I cringe and shake my head at their lack of education.

I know our readers are far too intelligent to use any of these words in this Liberal context. I know you've all heard people say them. Next time you hear someone use any of these, bless them with a little knowledge.