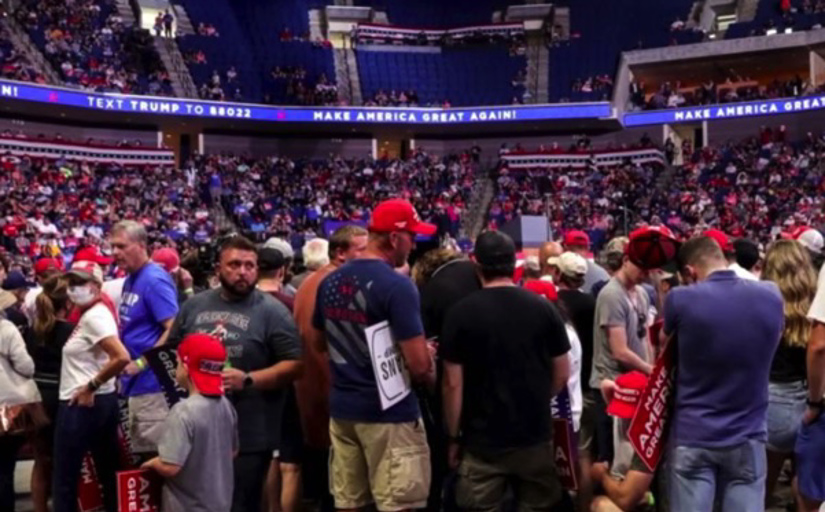 The recent Trump Rally 'kick-off' was attended by an enthusiastic crowd of thousands people. This even in the wake of the Covid-19 fears and anti-Trump suppression efforts.

In spite of that success, the Democrat surrogates are calling it a failure because the upper level of the BOK Center in Tulsa was largely empty.  Clearly a different result than the big turnout the Trump campaign had predicted during the week.

The reality is that the media, Democrats and anti-trump groups were employing every tactic they could to suppress attendance. The media was constantly pushing the Covid-19 narrative.

They are petrified at the thought that Trump could continue to energize his base with his highly attended rallies.  They even mounted a legal challenge that was overthrown by the Oklahoma Supreme Court at the 11th hour.

On top of that, anti-trump protestors blocked the entrances and metal detectors in an effort to keep supporters from entering the arena. After a certain point, the Secret Service stopped letting people enter. Because of the sometimes violent protesters at the entrances, law enforcement could not guarantee the safety of those already inside or the safety of President Trump.

In other 'suppression' efforts happening by the left.  The Trump campaign had been using a reservation page on the web that attendees could reserve tickets on. Apparently this effort was hijacked by an anti-Trump group called the 'Lincoln Project'.

Steve Schmidt, former 2008 campaign manager for John McCain and a harsh Trump critic, bragged that the Trump campaign was trolled by anti-Trump teenagers requesting tickets. Schmidt, a leader in the 'Lincoln Project' suggested the group was responsible for reserving thousands of tickets and undermining the rally attendance.

'This is what happened tonight. I’m dead serious when I say this. The teens of America have struck a savage blow against @realDonaldTrump. All across America teens ordered tickets to this event. The fools on the campaign bragged about a million tickets. lol. @ProjectLincoln.'

On Twitter, AOC claimed that the teens 'flooded the Trump campaign w/ fake ticket reservations & tricked you into believing a million people wanted your white supremacist open mic enough to pack an arena during COVID...Shout our to Zoomers. Y'all make me so proud'

Shout out to Zoomers. Y’all make me so proud. ☺️ https://t.co/jGrp5bSZ9T

We all know that the Democrats do not really care about the country, but Republicans like Steve Schmidt care so little abut the country that they are willing to help Democrat efforts to gain power. That speaks volumes.

When was the last time Biden had 15,000 at a rally? 2008? In the end, what does that say about enthusiasm about their candidate when they have to make efforts to suppress turnout at a Trump event. We saw this back in 2016 when Soros paid protesters were causing problems is Trump events.

In spite of all these efforts to suppress turnout, the Trump campaign still managed to get thousands of people into the 19,000 seat area. That is a huge success being the first rally since the onset of Covid-19 quarantines.

In addition, this did nothing to change the fact that the thousands who didn't make it to the event are still proud Trump supporters. Online watching of the live rally was in the millions! I watched the rally on a small online network that had over 100,000 watching their livestream. A record from this small organization.

In politics, there is the law of untended consequences. These efforts may have helped suppress physical turn-out at one rally, but they will fire up the Trump in numbers never seen before. As Trump has shown before, the 'Trolls' will not win.

President Trump will still have the momentum going in to the November election. Once we see no 'spike' in Covid-19 cases,  I am looking forward to overflow crowds at the rest of the rallies.