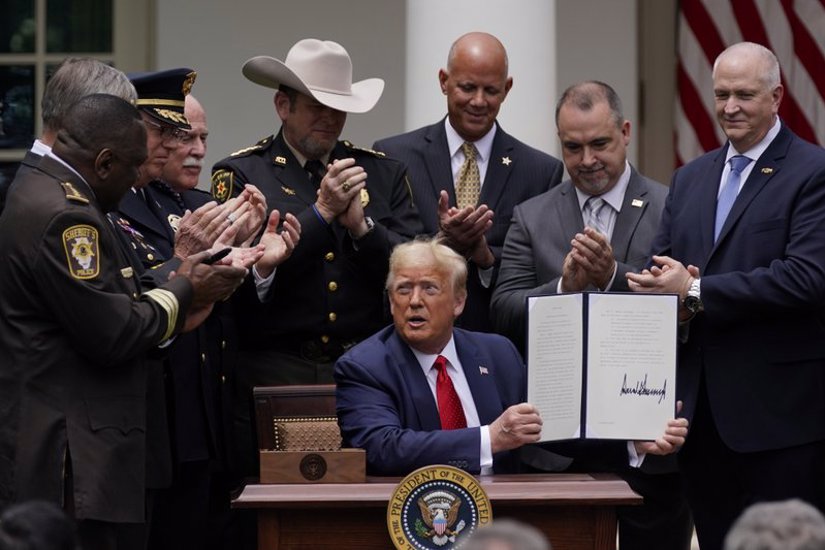 At this point, how can anybody with a functioning brain not support what President Trump is doing regarding the chaos of the recent unrest in our country? He did everything right regarding his Executive order on Police Reforms.

Of course, if you listen to CNN, you would hear that President Trump praised Police. Nothing more, just praised police. Why are they reporting this way? Well, they wouldn't want to show the black communities that he is actually listening and doing more. They want to perpetuate the 'police are racist, therefore by praising police, Trump is racist' narrative that CNN has been pushing.

Nothing could be further from the truth, let me set the record straight.

Let me begin by saying President Trump's Police Reform bill is not a perfect or complete solution to the police and community dichotomy, but it is a major step forward. His immediately addressing the issue head-on will go a long way to healing.

Earlier in the day, the President met with several families of individuals who died during interactions with police. These families believe the death of their loved ones were unjustifiable in their eyes. Sure, there are situations where information is subject to interpretation, but these people are looking for some sort of closure and the President is taking the time to LISTEN.

Every President talks about being interested about the people who lose their lives during police interactions, justifiably or not, but in the end they never actually follow through. President Trump was different, he listened and signed the Executive Order to actually do something about it.

The Order the President signed begins by banning 'choke holds' by police, except in life or death situations. This is not a new concept, because many police departments around the nation have already done this. The order makes it a requirement for all departments to make this the standard. It's also important that he left in the life or death component.

Too often police are in a position to have to choose between lethal and non lethal force. This still allows for a remaining non-lethal option. The President touted the promising research into giving police more less than lethal options. He also discussed getting help for officers from people who have more training in things like domestic disputes, addiction, etc.

Another provision is that he is requiring the development of a database in an effort to hold police departments accountable. The database would include disciplinary history of officers. This information helps police departments when hiring officers from other departments. It also shows problem offenders.

The officer who was involved in the death of George Floyd had a long history of negative disciplinary actions against him. Many people think he should not have been allowed to remain a police officer.

One of the biggest things about the President's speech was that he unequivocally and unapologetically showed support for police. In fact, he spoke very highly of them. This showed leadership by not acquiescing to the cries against police that seem to be dominating the news cycle.

Most of all, he did not speak so highly of police for political reasons, but he spoke so highly because it was the TRUTH. These officers go to their jobs every day knowing that each day may be their last. Yet, they still go to work.They do this even though their salaries are low, especially in the beginning. This shows that they love their jobs.

President Trump showed how he could support police while helping us all come together as a community. Obama and Biden could have done this, but didn't.

The President then took the time to reaffirm his own track record throughout his presidency. Things like creating the conditions for the lowest black unemployment in history. He reminded us about the record amount of government funds going toward HBCU's and the over $100 Billion to opportunity zones. He also talked about the First Step Act which especially helps the black Americans who were still in prison because of Bill Clinton.

His whole speech focused on reuniting America and coming together. This went against the caricature of Trump painted by the Left-wing media by showing he truly is doing everything to unite, not divide. He has also shown this by actually doing everything he promised. Something that rarely happens by Presidents.

The President started moving the ball and at the same time he empowered Congress to act on a more complete solution. Chuck and Nancy had better be paying attention, because he is making them look really bad by doing things in three years that they have been promising for decades.

Of course, the Left and the Media (same difference) can complain that it didn't go far enough, but actually there is only so much he can do. Unlike Obama, President Trump doesn't legislate through Executive Order, Congress must create legislation to do more. .

In the end, this was a great opportunity for President Trump to be 'presidential' and he did hit a political home run. He met with the families of those who lost their lives to police, he met with police, then he made something happen in the middle. Everyone got something closer to their goals.

This moment showed that President Trump is truly 'Uniter in Chief'.

Be sure to JOIN MAMMOTH NATION TODAY!