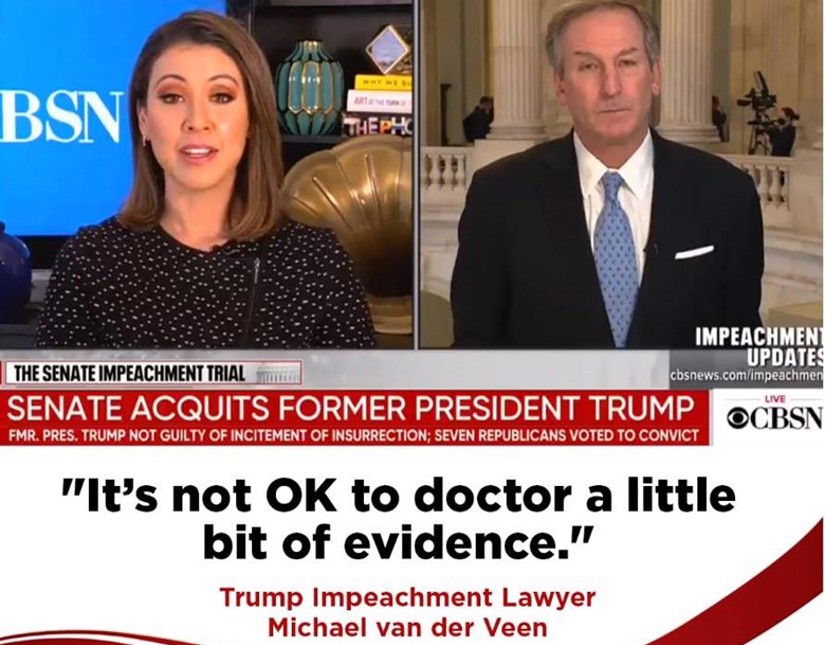 Falsus in uno, falsus in omnibus is a Latin phrase meaning “false in one thing, false in everything.” At common law, it is the legal principle that a witness who testifies falsely about one matter is not credible to testify about any matter. Although many common law jurisdictions have rejected a categorical application of the rule, the doctrine has survived in some American courts.

This was a legal phrase invoked by President Trump’s lead attorney in his second impeachment trial before the U.S. Senate in February 2021. The prosecuting team of “House Managers” had been caught doctoring written evidence and presenting tailored video evidence of the capitol riot on January 6th, the date when the Senate was counting the electoral votes for the 2020 presidential election.

His point was that if those Representatives of the U.S. Congress (House Managers) were being deceptive in any of those things, in a legally binding prosecution, their entire presentation could be considered deceptive/invalid as well. The prosecution’s presentation took over 14 hours over two days, while the defense took about 2.5 hours in one day. President Trump was judged not-guilty in both of his impeachment trials during his four years in office.

Time to put a stop to this Democrat/Socialist/Communist plot against our country, including the degradation of one of the greatest President's who ever served this country. We still stand with President Trump.

Remember, everything we have (our rights, desires, possessions, and life) are God’s. There will never be a time when it's okay to let anyone take that away.