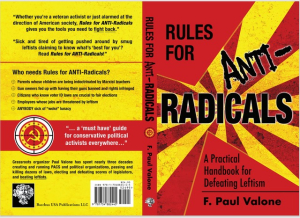 Bacchus USA Publications provides conservatives with the physical, intellectual, and political tools needed to survive in an American society that is fast disintegrating.

Author F. Paul Valone uses his 28 years of grassroots leadership to give conservatives the tactics to beat leftism, both in daily life and the political arena. His book, Rules for ANTI-Radicals: A Practical Handbook for Defeating Leftism, empowers not only dedicated conservative activists, but also any mainstream American forced to deal with “woke” lunacy.

Author Lori Valone is an expert on home preparedness and food supply disruptions from natural and man-made disasters, having spent ten years studying methods for gathering and preserving food. Her book is Building Food Security: Canning, Dehydrating, and Freeze Drying.

Rules for ANTI-Radicals: A Practical Handbook for Defeating Leftism

Oriented toward both activists and concerned citizens, Rules for ANTI-Radicals: A Practical Handbook for Defeating Leftism draws from the author’s twenty-eight years of grassroots leadership to empower conservatives often bludgeoned into silence by the left. It is a comprehensive tactical guide to direct action in economic, political, and legal arenas essential for conservatives to defeat leftism.

Who needs Rules for ANTI-Radicals?
•Parents whose children are being indoctrinated by Marxist teachers
•Gun owners fed up with having their guns banned and rights infringed
•Citizens who know voter ID laws are crucial to fair elections
•Employees whose jobs are threatened by leftism
•ANYBODY sick of “woke” lunacy 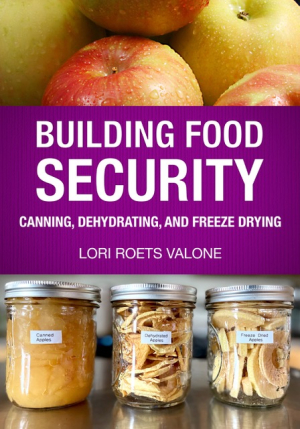 Not since WWII have concerns about food security affected so many. Shortages of basic food items on grocery shelves are a wake-up call.

Are you...
•Thinking about emergency preparedness?
•Concerned about the future of our country?
•Alarmed by perpetually vacant grocery shelves?
•Feeling the impact of inflation every time you go to the store?
•Unsure of how much food to store for your family?
•Interested in home freeze drying, dehydrating or canning?

If you answered yes to any of these questions, the worksheets in Building Food Security: Canning, Dehydrating, and Freeze Drying will enable you set food storage goals designed to help you work toward food security for your family. Sections dedicated to canning, dehydrating and freeze drying provide food preservation alternatives you can put to use immediately to begin meeting your food storage goals. An overview of tools and techniques is provided for each of the three food preservation methods, along with recipes for food storage staples and a step-by-step reference.